The future of the Panyos to debate 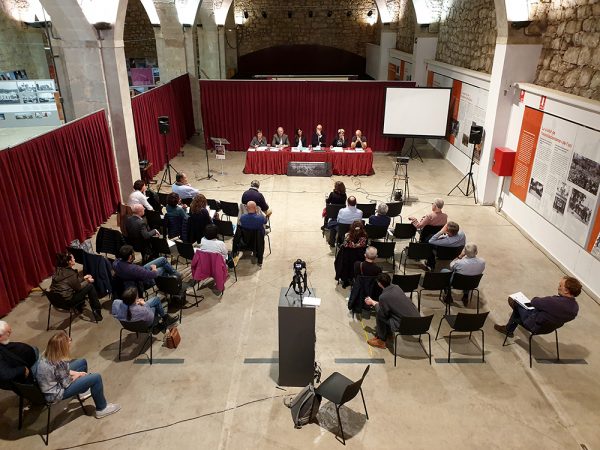 The Technical Museum of Manresa hosts the second technical seminars around the factory of Panyos that talk about uses and rehabilitation, with architects, and financing, with political leaders.

Last Friday, October 25th, the second technical seminar on the factory of Los Panyos was held at the Technical Museum of Manresa. Architects and historians put on the table the future of the building, its possible uses, advantages and limitations, and the search of financing.

The days were started with a talk by dr. Lluís Virós, which has allowed contextualising and placing all the participants, on the Miralda factory, the popular Panyos.

The conferences have had two round tables, the first, called “Technical intervention in industrial heritage”, moderated by Enric Massana, president of the Central Catalonia delegation of the College of architects of Catalonia, about uses. Much has been said about the flood of the area, a reef that for years has put an end to the fact of proposing uses in space. In what, if all the speakers agreed, it has been in the need to preserve the building, even without giving it a specific use. In this table were the architects Lluís Piqué, Clara Casas, Antoni Vilanova, Jordi Rogent and the honorary president of TICCIH, Eusebi Casanellas.

In the second table, in the afternoon, “Guidelines for the preservation and management of industrial heritage”, it has generated a more intense debate, as it focused on the political managers for the preservation and conservation of heritage. Moderated by Rosa Serra, and formed by Lluís Cerarols, Director of Territorial Services of the Department of Culture of the Generalitat of Catalonia, Joan Closa, Manager of Equipment Services, Urban Infrastructures and Architectural Heritage of the Diputació de Barcelona, ​​Araceli Esquerra, Councilor for the revitalization of the industrial colonies of the Consell Comarcal del Berguedà, David Aaron López, Town Planning Councilor and Anna Crespo, Councilor for Culture, both from the City Council of Manresa. Much funding has been talked about, asking directly about the ways in which they existed, and the possible uses. With the interventions it has become clear that it is essential to work in a network and as a whole to seek this financing, but at this time, Panyos are not priorities, because their intervention is not urgent, You have to work, to be prepared when the opportunity arises.

At the end of the conference, Mayor Valentí Junyent participated in the opening of the exhibition “Spaces recovered. The new uses of the Catalan industrial heritage “, and then the curator of the exhibition, Ferran Pont, gave a guided tour to those attending. The exhibition will be open until November 15th.